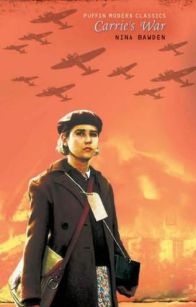 It’s interesting to read a well-established classic, such as Carrie’s War.   The plot and characters are instantly familiar and comforting.  It’s the literary equivalent of pulling on a favourite jumper.

Despite this familiarity, key moments in the book, when Mr Johnny attacks Frederick with a pitch-fork or when Carrie and Nick are spooked walking through the woods, remain vivid and fresh.   This, perhaps, is what defines a ‘classic’; a story that not only withstands being commonly known but actually flourishes and becomes richer the more times it is told.

Carrie’s War follows two evacuee children, Carrie and Nick, who are sent away to rural Wales during the Second World War.   They are placed with the Evans family – foul-tempered Mr Evans and his downtrodden sister Auntie Lou who, thankfully, finds freedom by running off with an American serviceman.

Mr Evans’ moods make for an unpleasant stay.  The children find solace with Mr Evans’ estranged sister, Hepzibah, who lives deep in the woods. She provides the maternal warmth and comfort otherwise missing in the children’s lives. Another evacuee, Albert Sandwich, lives with Hepzibah, as does Mr Johnny – a well-drawn character who has what would now be called learning difficulties.

What’s interesting about a book called Carrie’s War is how little the war actually features in the story.  This is not really, in the conventional sense, a war story at all – there is little or no mention of bombs, or Hitler, or air-raid shelters, or soldiers (aside, of course, from Auntie Lou’s romantic American saviour and a brief appearance from Mr Evans’ son).

In fact the real ‘war’ is with Mr Evans – he, if anyone, is as close as it comes to Hitler in this book: an oppressive, abusive tyrant who Carrie and Nick, at different times, fight with and flee from.

The story is over forty years old but it certainly stands the test of time.  A powerful book that works on many levels and, like a best jumper, should be treasured and reached for frequently.