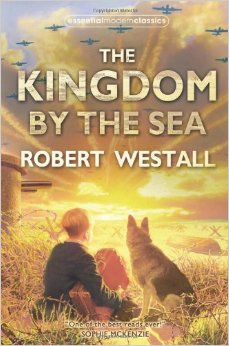 It’s 1940-something in the north east of England. A bomb drops and a world – Harry’s world – implodes. He makes it to the safety of the air-raid shelter but his home is flattened.  His parents are nowhere to be found, too slow to make it up the garden path.  His pet rabbits are dead and, except Cousin Elsie, who is ‘more awful than death itself’, he has no-one.  So, in the dead of night, he steps through the debris and decides to disappear, to just go away.

This is a gripping, dramatic story. It follows Harry and his dog Don as they head northwards, aimlessly at first and then ‘like a pilgrim’ towards Lindisfarne. There are times of real desperation when Harry is lonely, hungry, and afraid but Westall captures a Boys Own spirit of adventure and daring-do. There is a romance and a boyish excitement to the scenes where Harry sleeps under the stars stuffing his face with vinegar-smothered chips, or when he discovers a shelter with an open door, which reveals a bed, candles and a fire.

The Kingdom of the Sea reaches a crescendo when Harry finally reaches Lindisfarne, scrabbling across the sand to the Holy Island. He hopes for safety and refuge yet he finds neither. As the tide closes in, Harry battles to survive.  This is a brilliant, breathless passage in the book – Westall’s writing zips across the page as he describes the sea closing in, so real it’s almost saline.

It is grim reading at times, and Westall’s depiction of childhood can be Lord of the Flies brutal. Harry meets good, kind people who help him and he meets mean, harsh people who threaten, beat and abuse him. It is no surprise, then, that Harry becomes suspicious of adults; ‘they always want something’, but Harry’s real fear is children; other, merciless children who follow him and fight him – real fights with snapped bones and wounds oozing warm blood.

But this is a book which, ultimately, recognises the power of the human spirit, particularly in times of war; Harry never gave in, he never surrendered.

3 thoughts on “The Kingdom by the Sea”