Iron Fist is a thrill-a-minute adventure story from Andy Briggs.  It’s premise is a cracker – a secret inventory, as large as a city and packed to the brim with gizmos and gadgets, hidden from the world and kept safe by Dev and his uncle.  No surprise that some serious baddies want to get their hands on the goodies inside, not least the mysterious Iron Fist. The Inventory is impregnable.  Well, it’s supposed to be…

I’m delighted to welcome Andy Briggs to the blog, he’s been good enough to answer a few questions about the book.

I really enjoyed Iron Fist – was it fun to write?  Where did the idea for it come from?

It was terrific fun to write because I tried something new. It’s my twenty-first book (gasp! Even I had to check) and I normally plan each chapter and character beat before I start, which is something I do for screenplays. This time I wanted the Inventory to surprise me, so I knew where to start and where I was headed and, aside from a few character beats, I had no idea what was going to happen next. 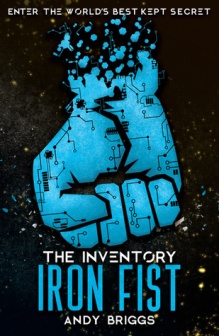 I love inventions and often read about new and exciting things that never see the light of day, such as water powered cars (yes, they have built them) and personal rocket packs (another yes for those). In the back of old comic books you used to see adverts of glasses that hypnotise your friends or gizmos that allow you to breathe underwater. So why keep them a secret? Obviously somebody is judging that the world is not ready to use them, so they’re being hidden away from us by some sinister anti-Santa Claus.

There’s more to come in the series – have you got them all mapped out?   Can you give us a hint where the story will go next?

Oh, there is a lot more to come! I think the beauty about inventions, and the world of gadgets, is that you can always add things to existing situations in a more organic way – by its very nature, I can just keep inventing! I have a series of stories within-in stories I would love to tell, and I have finished book two already, so my mind is already on book three… I can tell you that the story goes beyond the walls of the Inventory, but the Inventory itself has far from revealed its secrets…

Technology is a big theme in the book.  Do you think we are slaves to it or will technology save the planet?

Wow! Such a wonderfully deep question! I think (and in some ways hope) we are slaves to the planet and we will save the damage we’ve done through technology and science. It’s the only way forward. Humanity has acted like a virus, gnawing away nature and the world around us. The way we have treated the planet reminds me of those old Wild E Coyote cartoons in which he is sawing through the very tree branch he’s sitting on! The planet will snap if we don’t do something. Enter science, invention and the wonderful concept of the human spirit. That’s how we’ll save ourselves.

You’ve written books, comics and films – what do you like writing best?

Each has its own merits, and with each you meet wonderful creators who just add to my own knowledge of story telling. In my own little head I have a pyramid of writing. Book are at the bottom, the strong, wide stable story monoliths that can be as large and elaborate as you want them to be. The next layer consists of films and TV, writing stories in a finite box, which is dictated by the running time of the show. Then there are comics – fewer pages and only a handful of panels per page to tell a story through static pictures and a little text. That’s incredibly difficult and I have learnt a lot from great comic writers out there, such as Tony Lee. Then, top of the pyramid – poems and songs. In my humble view, they’re incredibly difficult to write, very technical, and wwwaaayyy beyond my talents!

Do you approach writing a book differently to, say, writing a film script?  How is the process different?

It’s a joy to write a script, then change gears and jump into a book because they are very different processes. With movies you need to plan the scenes, sequences and character arcs all within 90-120 pages. You must be lean regarding what you put in there, and you can’t get into characters’ minds – you have to show, not tell, what people are thinking. Whereas a book’s plot can wander to unexplored territory and allow you to delve into a character’s darkest emotions and thoughts. It’s exciting!

What’s your writing routine (if you have one!)?

Procrastinate, procrastinate, panic. Actually I love researching my stories, reading other similar books or watching films of similar genres to see how other people have tackled themes. When I’m ready to go I usually write in the evening until the wee hours. Daytime is usually snaffled by meetings or admin (which is a technical term writers use for surfing the internet.)

When you think of your reading as a child, what springs to mind?   Can you finish with a recommendation?  If people like Iron Fist, what should they read next…?

Daredevil and Spiderman comics, the Hobbit, Arthur Conan Doyle’s The Lost World, Gordon Boshell’s Captain Cobwebb books, Stig of the Dump and Fighting Fantasy books and any non-fiction book about everything from nature to electronics; from magic tricks to survival. That’s pretty much my childhood reading list!

Aside from the second Inventory book (out in October!) I would recommend you next read Chris Bradford’s Bodyguard series. Excellent stuff there!